Posted on April 7, 2015 by chrisballprojects

So, I’ve spent a lot of time on this project, which I started in February. I’ll make this post a short one, however. I wrote a processing program that converts images into .svg files suitable for our hackspace laser cutter, using various halftoning methods to render the image.

Here’s an example – The donor image for this cut is reproduced by kind permission of photographer & artist Tara Tulenchik – you should check out her work here and here. 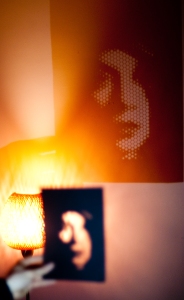 The above and below images were taken by Jack Lewis, a talented photographer friend of mine. 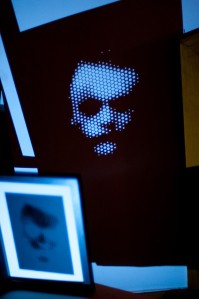 And one of the joker, rendered in hexagons

Below are some examples of the program in use – I’ve used Processing with the controlP5 library to put this together. You can load an input image and then select various rendering options.

If you want the Processing sketch, get in touch – I’ll put it up on Github if you find it easy enough to use.

Although, I’ll admit, results are mixed at this point, as they rely mostly on your ability to perfectly distribute spray paint/chocolate powder – shouldn’t be a problem for pro graffers/baristas.

I’ll be starting a shop on etsy to sell these as personalised portraits (hopefully), but if you’re already interested and want to commission an image/stencil/flyer/etc., get in touch.

Since starting, I’ve found other people are working on this type of thing – you can already find an existing (and more powerful) program here: http://www.students.tut.fi/~syvajar3/ under “DXF Halftone 2.1”. This program has many things I haven’t had time to implement, such as arbitrary grid rotation and line halftones. Of course, it should also be possible to produce these in photoshop individually, or repeatedly using scripts.

I fill my spare time playing and recording music, and building things to amuse myself.
View all posts by chrisballprojects →
This entry was posted in Processing Projects and tagged Halftone, Laser Cut, Processing, Tara Tulenchik. Bookmark the permalink.